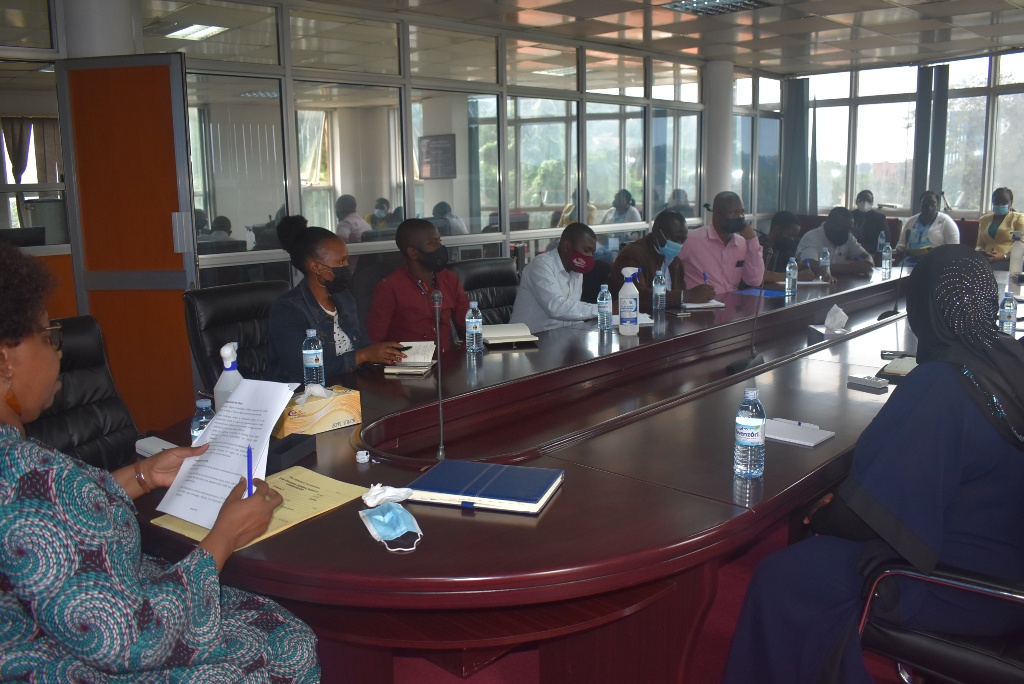 The Uganda Journalists Association (UJA) has been the first among other UHRC partners to pay a courtesy call on the new Uganda Human Rights Commission (UHRC) Chairperson and Commissioners since they were sworn-in on Wednesday September 29, 2021.

The UJA delegation of seven which was led by the Deputy President Doreen Ampumuza Mwesige and Board Member Joshua Kyalimpa, was welcomed to the Commission Headquarters at Twed Plaza by the Chairperson Ms. Mariam Wangadya, on Friday October 22, 2021.

“I would like to first of all thank the UJA Executive for initiating this courtesy visit to us. We at the Uganda Human Rights Commission are aware of the importance of the media in the protection and promotion of human rights. It has been one of the key sources of information for the commission on human rights violations that occur within society. I remember some time back we had a Memorandum of Understanding (MoU), but it had a clause that it would expire after five year. I would like to hear from you on that,” Ms. Wangadya said in her introductory remarks before the UJA delegation expounded on purpose of their visit.

Mr. Kyalimpa who gave the background to the establishment of UJA way back in 1963 as the umbrella organization for journalists, also explained why it was important for both institutions to renew their MoU. He said there are a number of issues on which UJA can collaborate with the Commission such as training of journalists in principles of the Human Rights Based Approach to reporting; joint human rights advocacy and protection and promotion of rights and freedoms of journalists. He emphasized the fact that whereas journalists were also human rights defenders given the nature of their work, they also fall into the category of people whose rights and freedoms require protection by the Uganda Human Rights Commission as the National Human Rights body. He cited human rights violations faced by some journalists such as torture, harassment and loss of their equipment at the hands of errant law enforcement officers.

“At the International level, UNESCO is working on a manual on the safety of journalists and we believe if we worked with the Commission as the National Human Rights Institution we can have a louder voice. There are also issues in the legal framework that we are currently lobbying for like the proposed amendment to the Press and Journalists Act, which would immensely benefit from input from the Commission on the human rights standards to look out for,” he said.

Mr. Kyalimpa also raised the issue of the advent of digital media which has been enthusiastically embraced globally as well as locally here in Uganda. He appealed to the Commission to work with journalists and their umbrella organisations like UJA to address the challenges brought about by the new media while working to ensure that media freedoms and freedom of speech generally are not suffocated in the name of regulation on use of social media.

UJA Vice President Ms. Ampumuza revealed that the Association is looking forward to establishing a training center for continuous and regular capacity building of Journalists to weed out biased reporting and other unethical practices. “This is another area where we would welcome collaboration with UHRC,” she said.

The UJA Secretary General Emmanuel Kirunda said the Association has carried out a survey on the State of Media during Elections and the Impact of COVID-19 on Journalists in which they have documented 51 cases of human rights violations against journalists ranging from torture, confiscation of their equipment and wanton arrest, among others. He said the survey also revealed that COVID-19 had adversely affected journalists in that some were laid off their employment, while others were not receiving their salaries.

Responding to some of the concerns raised by UJA, Ms. Wangadya said the Commission is aware of the violations against journalists, some of which have been reported to the Commission directly by the affected journalists. She however, expressed concern at the way  most of the cases reported by journalists either in court or to the UHRC tribunal end up being resolved pre-maturely when the complainants settle their matters with the accused without knowledge of the Commission. She observed that whereas the Commission encourages the settlement of cases through Alternative Dispute Resolution (ADR) by conducting mediations, journalists doing so without knowledge of the Commission should be discouraged as it sends out the wrong impression of inaction on the part of UHRC. “We encourage out-of-court settlement but also professionalism and integrity. If the case is to be withdrawn then it should be done formally with the knowledge of all parties concerned,” she said.

She said the Commission has over the years highlighted some of the critical issues concerning the media including delegating a whole chapter on rights and freedoms of the media in its Annual Reports submitted to Parliament; receiving and handling cases of human rights violations against journalists; and carrying out joint human rights advocacy with UJA, among others. The Chairperson assured UJA that a team of technical officers will be set up to study and review the previous Memorandum of Understanding and the signing will follow.

Also to attend the meeting were the other Members of the Commission who had the opportunity to make some brief remarks. Commissioner Jacklet Atuhaire expressed concerns with the sometimes biased reporting by the media and urged the Association to ensure its members are neutral and professional as they do their work.

Commissioner Meddie B. Mulumba expressed worry of the social media seemingly killing mainstream conventional media which has occasionally published or broadcast stories lifted straight from social media platforms without any verification. He accordingly urged UJA to build the capacity of its members in writing well researched and verified stories as opposed to the current tendency of rushing to be seen to break the news. Hon. Mulumba also urged UJA and its membership to learn and understand how the Commission works including getting conversant with its constitutional functions and limitations. He for instance highlighted the need for the media to know that the Constitutional role of the Commission is to make recommendations on the state of human rights in the country to Parliament, which is in turn the body mandated to take action on them. He also called on the media to interest itself in the limitations of the Commission like the constitutional provision that bars the Commission from handling cases that are before other courts of law.  He underscored the need for the media which is the main channel for disseminating information and knowledge to the public to always relay factual information.

Commissioner Crispin Kaheru appreciated the work of journalists especially of raising the red flag whenever there were human rights violations during the period of the COVID-19 pandemic. He also commended the journalists’ associations for conducting voluntary drives to rescue their members who were affected by the COVID-19 pandemic situation.

Commissioner Shifrah Lukwago said she looked forward to the partnership with UJA through the renewed MOU. She however appealed for responsible reporting by the journalists whom she urged to desist from sensationalism. “It is always better for you to get information from reliable sources. Whenever you need information, the office of the chairperson is always open.”

On his part, Commissioner Rev. Fr. Simon Lokodo echoed previous calls for the renewal of the MoU with UJA. He urged the media to respect their profession by always being ethical and objective, noting that the ultimate objective should be to serve the citizenry by providing factual information. He was delighted that the Uganda Journalist Association which he referred to as indispensable partners because of its complimentary role to the work of the Commission, was the first among the UHRC partners to pay a courtesy call on the newly appointed Commission. “When the media chooses to ensure that everybody enjoys his rights b seeking out the National Human Rights Institution, it is a great and welcome gesture,” he said in reference to the importance of the visit.