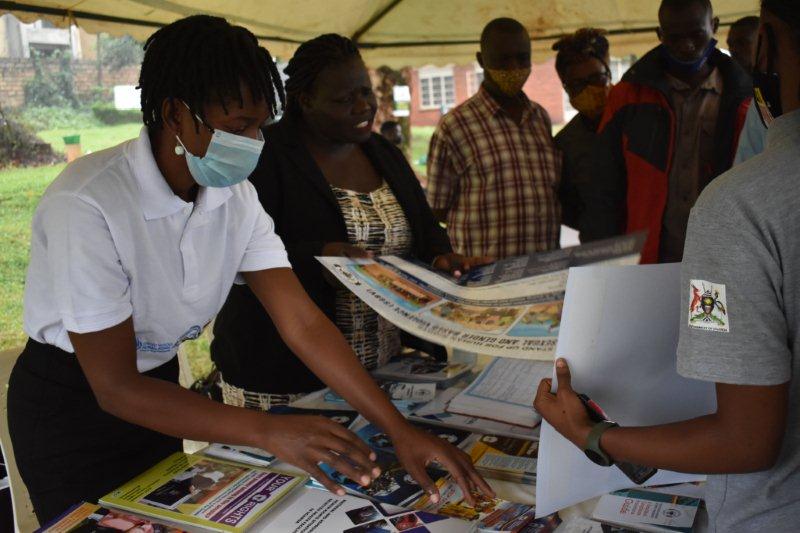 The Uganda Human Rights Commission (UHRC) took part in the Open Day exhibition organized by Nakawa Chief Magistrates’ Court for Refugees and Asylum Seekers on Monday (March 22). The exhibition which attracted over 20 participating organization both from government and Civil Society, saw the UHRC explain its mandate and functions to various groups of refugees.

“We shall engage with JLOS (Justice Law and Order Sector) and we welcome partnership from all stakeholders in the interests of refugees and asylum seekers, for concerted efforts, in order to find lasting solutions to the hurdles that you have mentioned,” he stated.

The UHRC was represented by the Public Affairs Unit which co-opted members from other directorates; Ms. Phiona Kyomugisha Birungi from Directorate of Cimplaints, Investigation and Legal Services, Ms. Roselyn Amoyo from the directorate of Research, Education and Documentation. The Acting Chairperson Dr. Katebalirwe Amooti Wa Irumba was represented by Principal Human Rights Officer Ms. Theopista Twembi.

The Commission interacted with different refugee groups like, Youth Mission and Refugee engagement forum. At least 20 refugees were willing and ably registered their names at our stall. Of these; eight were female and 12 Male. One complaint was registered on the spot by the Legal officer, Ms. Kyomugisha.

Apart from the Principal Judge, the other dignitaries present included; the Chief Registrar, Judiciary; the Permanent Secretary, Ministry of Internal Affairs; Senior Technical Advisor, JLOS; the Lord Mayor of Nakawa Division; Officials from the office of the Prime Minister and Senior officials of International Rescue Committee (IRC) among others.