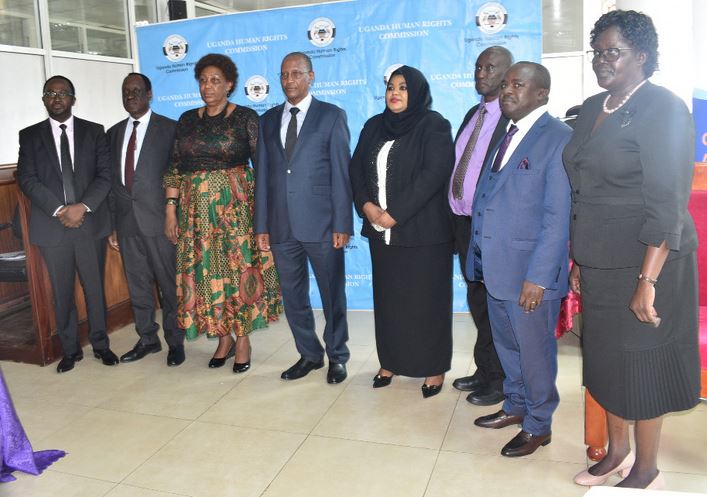 They were sworn-in by the Deputy Chief Justice (DCJ) Hon. Richard Butera today (Tuesday December 20, 202) afternoon. In her speech after the three were sworn-in, Ms. Wangadya described the trio as “the best candidates possible for the appointment.” “Hon. Nsubuga, Hon. Basaliza and Hon. Apitta are gentlemen of high moral standing and unquestionable integrity. They bring on board a wealth of knowledge and experience in human rights, fighting crime, promotion of peace and security, education, democracy and good governance,” she said.

She also revealed to the DCJ how the UHRC is one of the only four National Human Rights Institutions in Africa ranked with an A status and called upon the President and government at large to support the Commission in execution of its mandate. “What government should do is to arm, us with the necessary resources to effectively deliver on our mandate, instead of creating a Cabinet Committee or whatever desks to attempt to take over our roles. We have not failed to work. We have simply been starved of resources. Without the support of government we risk losing our ‘A’ status,” she said.

Justice Buteera on his part first reminded the Chairperson, Commissioners and everyone present of the functions and powers of the UHRC by reading them verbatim as they are laid down in the Constitution. “Treat all people equally, without fear or favor, affection or ill will. Consider all the work you do holistically important. I encourage you to strive to the best of your abilities always and let your contributions be felt by those you serve and those after you have left this office. This Commission with such commitment to hard work and coordination with other state agencies will have no backlog in handling complaints filed by the public and that is when we shall all be seen to promote the Commission’s mandate. The responsibility to effectively implement your mandate under the law rests entirely with you and the Commission as a whole. Always consult and make decisions which do not deny Ugandans the intended services. Work as a team in the Commission not as individuals that is when you will achieve your desired mission which is “to protect and promote fundamental human rights and freedom in Uganda for sustainable development,” he said.

Also present was the Secretary to the Commission Margaret Ejang who read the citation presenting each of the three new Commissioners to the DCJ before the oath was administered. Also present from UHRC were Directors Ruth Ssekindi of Monitoring and Inspection, Ida Nakiganda of Complaints, Investigation and Legal Services and Sarah Nakumitsa of Regional Services plus other members of staff. The New Commissioners were accompanied by their immediate next of kin to the swearing-in function.

Article 51(2) of the Constitution provides that the Commission shall be composed of a Chairperson and not less than three other persons appointed as Commissioners by the President with the approval of Parliament. The addition therefore now makes the Commission to be fully constituted with the maximum number of six Commissioners.