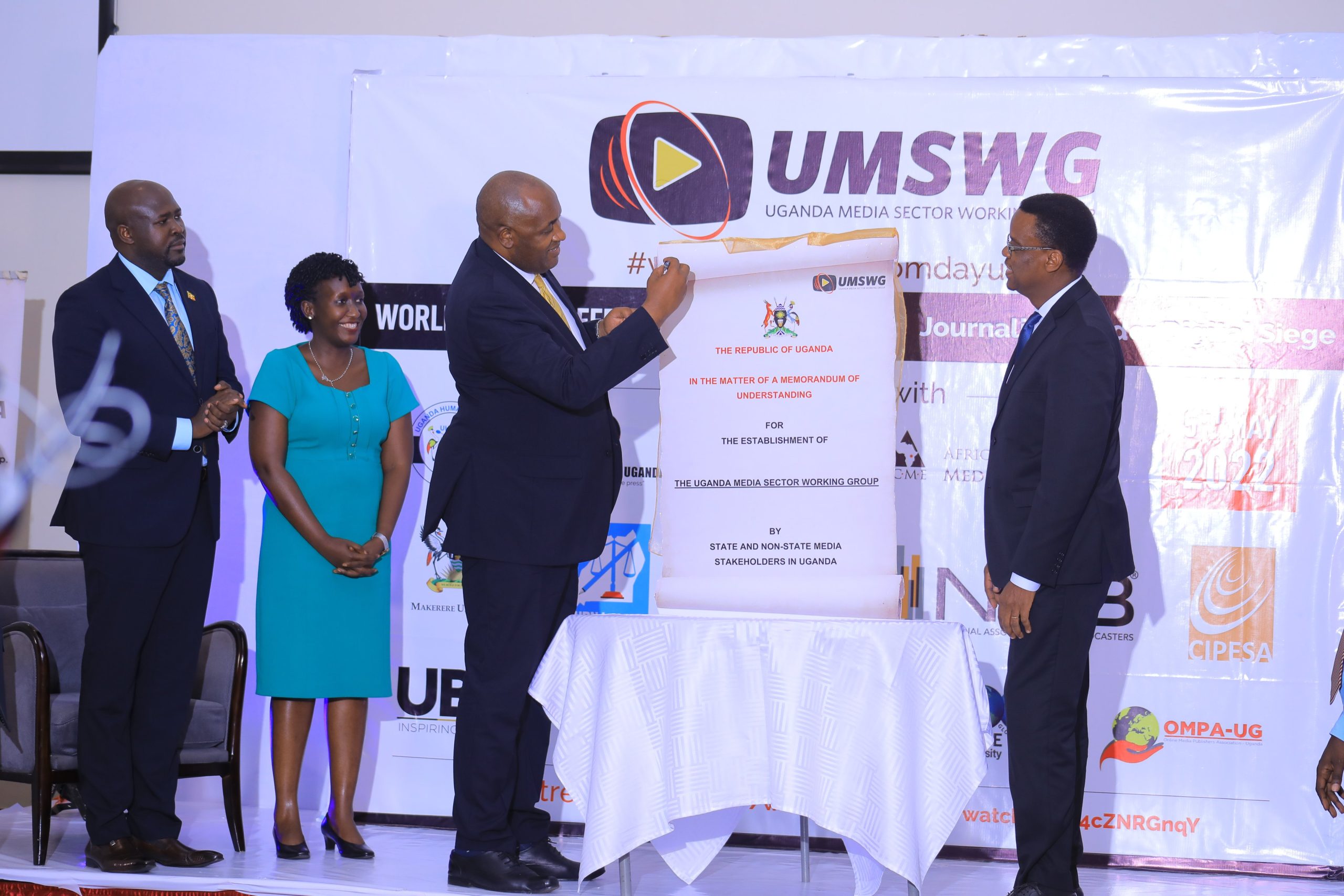 Speaking as the key note speaker at this year’s World Press Freedom Day commemoration event held at Mestil Hotel, Kampala on Thursday May 5, 2022, Robert Kabushenga the Host of the #360 Mentor on Twitter Spaces, decried the slow pace at which government of Uganda has embraced the global digital transformation age which is now upon us. “The digital transformation is here with us and it is imperative that all of us particularly government desist from viewing it as an irritation. Journalists on the other hand need to urgently and wholeheartedly embrace digitalization and high tech innovations by taking advantage of the opportunities therein, for them to survive in the new era,” Kabushenga said. He further emphasized that it is not journalism under digital siege, but rather the journalists themselves whom he advised to embrace technology by using it to enhance their creativity and ultimately advance their journalistic skills.

The Uganda Media Sector Working Group (UMSWG) in partnership with Uganda Human Rights Commission, the Media Council of Uganda, Makerere University Department of Journalism, the African Center for Media Excellence (ACME) and the National Broadcasters Association organized this public dialogue in commemoration of the World Press Freedom Day under the theme “Media under Digital Siege.” The organisers seized   the day an opportune moment for news consumers, journalists, policy makers, politicians, economic planners, media owners, media rights defenders, tech investors and scholars to reflect on the current state of affairs and the impact of the digital era on freedom of expression and the role of the media in the digital economy.

The Minister of ICT and National Guidance Hon. Chris Baryomunsi who was the Chief Guest at the event called upon the media to be vigilant while carrying out their journalistic work. He advised journalists to take advantage of the current technological development to advance Journalism. “The media landscape has changed and continues to change. We need to look at how we can take advantage of the digital revolution to improve the way we do Journalism,” he said.

Hon. Jacklet Atuhaire Rwabukurukuru, a Member of the Commission at the Uganda Human Rights Commission delivered the opening remarks at the event representing the Chairperson of the Commission, Hon. Mariam Wangadya. She lauded the media for their work in the past year and commiserated with those that faced challenges in the course of their work. “The Commission applauds all media practitioners that did their best in the past year to play their role in empowering the citizens and holding the duty bearers to account.”

In her remarks read by Hon Atuhaire, the Chairperson of UHRC also underscored the role of the media in development, democracy and human rights observance, pointing out that press freedoms are recognized in our Constitution which is the spreme law of the land and several other human rights instruments that Uganda has ratified. “As we reflect on the state of press freedom in Uganda, we note generally that Uganda has maintained a relatively free media landscape, save for some isolated reports of ill treatment of journalists in the course of their work, some of which have been documented and investigated by the Uganda Human Rights Commission. The UHRC continues to monitor and investigate such incidents, as well as engage with all relevant stakeholders including duty bearers, to address the issues so that perpetrators can account and victims can get justice,” she said.

The UHRC Chairperson’s remarks also pointed out the downside of the digital era including the rise to avenues of misinformation and fake news; low media ethical considerations by some of those practicing citizen journalism who have sadly used the spaces to violate human rights; failing to use the digital spaces responsibly. She also used the occasion to call upon journalists to up their game on professionalism in order to claim their critical role in the current era of information explosion occasioned by the digital transformation. She urged all stakeholders particularly journalists and the entire citizenry to take collective responsibility to embrace the positive transformation that technology has bestowed upon us and also be accountable to the highest standards for professionalism and human rights observance in the digital spaces.

The event also saw a panel discussion on the impact of digitization on Journalism in Uganda and experts from different media organizations shared actionable insights on how the media and specifically the journalism industry can use technology and digital spaces for the better.

The dialogue which attracted over 100 guests from government ministries, departments and agencies, legislators, representatives from civil society organizations, the academia and members of the media was sponsored by among others the Media Council of Uganda, Uganda Human Rights Commission, African Center for Media Excellence (ACME) and Collaboration on International ICT Policy for East and southern Africa (CIPESA).

Other dignitaries who spoke at the commemoration were the Chairman of the Media Council of Uganda Mr. Paulo Ekochu who emphasized the need for optimism; the founding Committee Member of Uganda Media Sector Working Group (UMSWG), Mr. Charles Odoobo Bichachi who in his opening remarks said the group which was launched in 2020 is a multi-sectoral outfit with the major objective of addressing the persistent challenges faced by journalists in Uganda.  The commemoration event was crowned with the recognition of three distinguished individuals and groups from divergent but complementary areas who have made a significant impact on the media industry.  The Minister of ICT and National Guidance Hon. Chris Baryomunsi was on hand to present the awards to Mr. Ilakut Ben Bella for his elaborate and historical career as a journalist and lecturer; Mr. Baylon Katahikire a seasoned newspaper vendor in Kampala for supporting the media industry as the link with news consumers; and the Uganda Media Women’s Association (UMWA) for the work of empowering the women in the media industry.