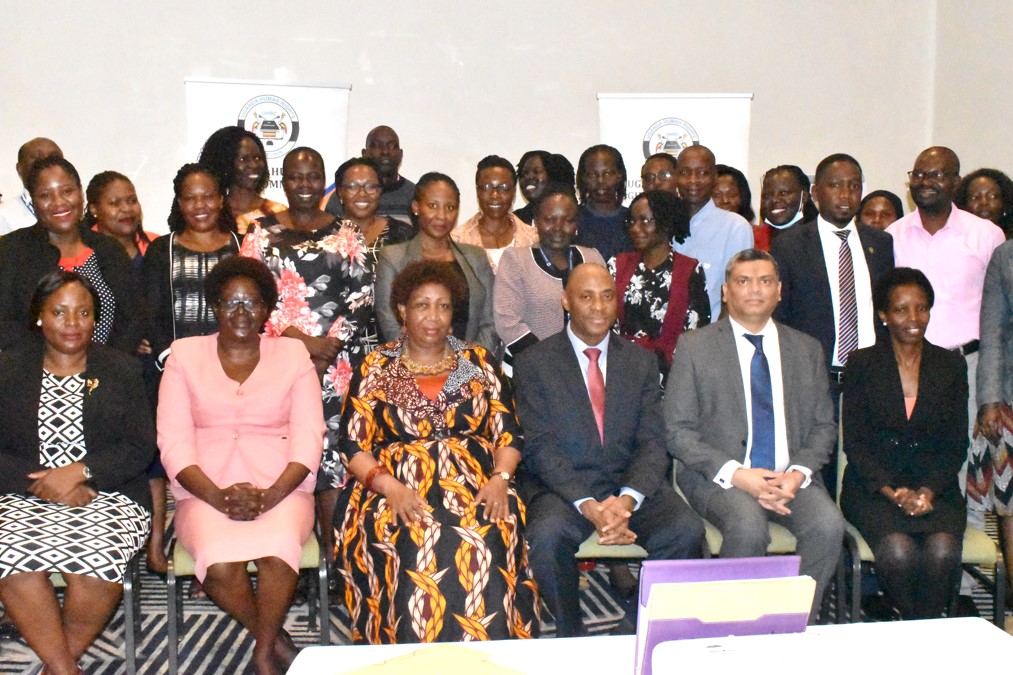 The Commonwealth Secretariat has sent two senior officers to offer technical support to the Uganda Human Rights Commission (UHRC) in regard to its role as a National Human Rights Institution (NHRI). The two officers; Mr. Steve Onwuasoanya the Human Rights advisor to the Secretariat and Mr. Ekanayake Mudiyanselage Priyantha Sumedha from the Commonwealth human rights unit were received by the Chairperson and members of the Commission on Monday October 17 and will be in the Country up to Friday October 21st, 2022. In her welcome remarks during their first session on Monday, the Chairperson Hon. Mariam Wangadya narrated the background to the formation of the UHRC, the Constitutional and other legal guarantees that have ensured its independence and long-term existence.

“Today your team is meeting Member of the Commission, Directors and Senior Officers of the Commission. Starting 18th to 20th October 2022, you will be training our Monitors at Head Office, Regional and Field Office level. I am very confident that the training will enhance the capacity of our officials to promote and protect human rights in the Country,” Hon. Wangadya said.

“I say this because I know that the Commonwealth Human Rights Unit supports Commonwealth countries in their effort to promote, protect and respect internationally recognized human rights principles, standards and practices through provision of technical assistance targeting building effective NHRIs).”

The Chairperson also announced that the team will also be meeting the Minister of Justice and Constitutional Affairs, the UN Resident Coordinator and the Chairperson Human Rights Committee of Parliament among other government officials.

In his remarks, Mr. Onwuasoanya appreciated the Commission and members of staff for the hard work that has enabled it to maintain its A-Status accreditation by the Global Alliance of National Human Rights Institutions (GANHRI).

“With an A-status National Human Rights Institution Uganda can; participate in person or through pre-recorded video message in the Human Rights Council plenary debates, panels or annual discussions. It can also take part in the adoption of the outcome of the Universal Periodic Review, submit documents, which can be issued with UN document symbol and has the rights to nominate candidates as special procedure mandate holders among other roles in the Human Rights Council,” he said.

He highlighted a number of emerging global Human rights issues like the right to clean, healthy and sustainable, Climate Change, Stateless persons and Business and Human Rights. He said states have an obligation to protect and promote these rights and to provide mechanisms for their realization. He noted that even where the states are unable to ensure full realization they are obliged to embark on progressive realization.

“When treaty bodies demand for the realization of a right like the right to education by urging states to provide free Universal Primary and Secondary Education, some governments will say, there is no money. But we say, if there is no money to facilitate free education, at least come up with a policy supporting free education or legal guarantees as you look for the money. The process has to start somewhere,” he said.

On her part, the Director Monitoring and Inspection Ms. Ruth Ssekindi informed the guests that Uganda is one of the countries facing effects of climate change and changes in the environment as evidenced by the recurrent mudslides, landslides and floods in the Mt. Elgon and Rwenzori regions leading to loss of life. She said Uganda is also facing changes in the seasonal rainfall that is making the planting seasons unpredictable to farmers exacerbating the hunger situation in Karamoja and Soroti sub-regions.

She further noted that Uganda is also one of the countries with the problem of stateless persons because of the constitutional provision which only recognize tribes that were in Uganda by 1922. She said the country is yet to clearly solve the Banyarwanda question, whereby there is the Banyarwanda tribe in the Constitution and yet there is a country called Rwanda where they are presumed to originate.

“These are people presumed by the locals to be Rwandese yet they are not regarded nationals by the Rwandan government. Of recent they have come up and prefer to be called Abavandimwe as opposed to being called Banyarwanda. There are also Ugandans of Indian descent who are not recognized by the Constitution as a tribe yet their great grandparents were born here and they know no other country other than Uganda,” she said.

After the first session on Monday, the two officers paid a courtesy call on the President Uganda Law Society Mr. Bernard Owundo and the head of the Judicial Training Institute Justice Damalie N. Lwanga.

While opening the training for Monitoring, Regional and Field Office staff on the second day (Tuesday), the chairperson revealed that the Commission is a member of the inter-ministerial steering committee on human rights to which it has provided technical expertise towards the process of developing the National Action Plan on Human Rights and it is in its final stages.

“These are some of the mechanisms that we use to ensure that Government is meeting its international and regional obligations,” she said.

She appreciated the Commonwealth Secretariat for their financial and technical support to this training, their support to commonwealth countries in the protection and promotion of human rights and the recent sponsorship of NHRIs to the Commonwealth conference in Kigali – Rwanda earlier this year. The Commonwealth team trained the UHRC officers in areas like the Functioning of UN human rights mechanisms, the Universal Periodic Review (UPR), implementation and monitoring of recommendation, the right to life, equality and non-discrimination, civil society engagements and good practices among other topics.