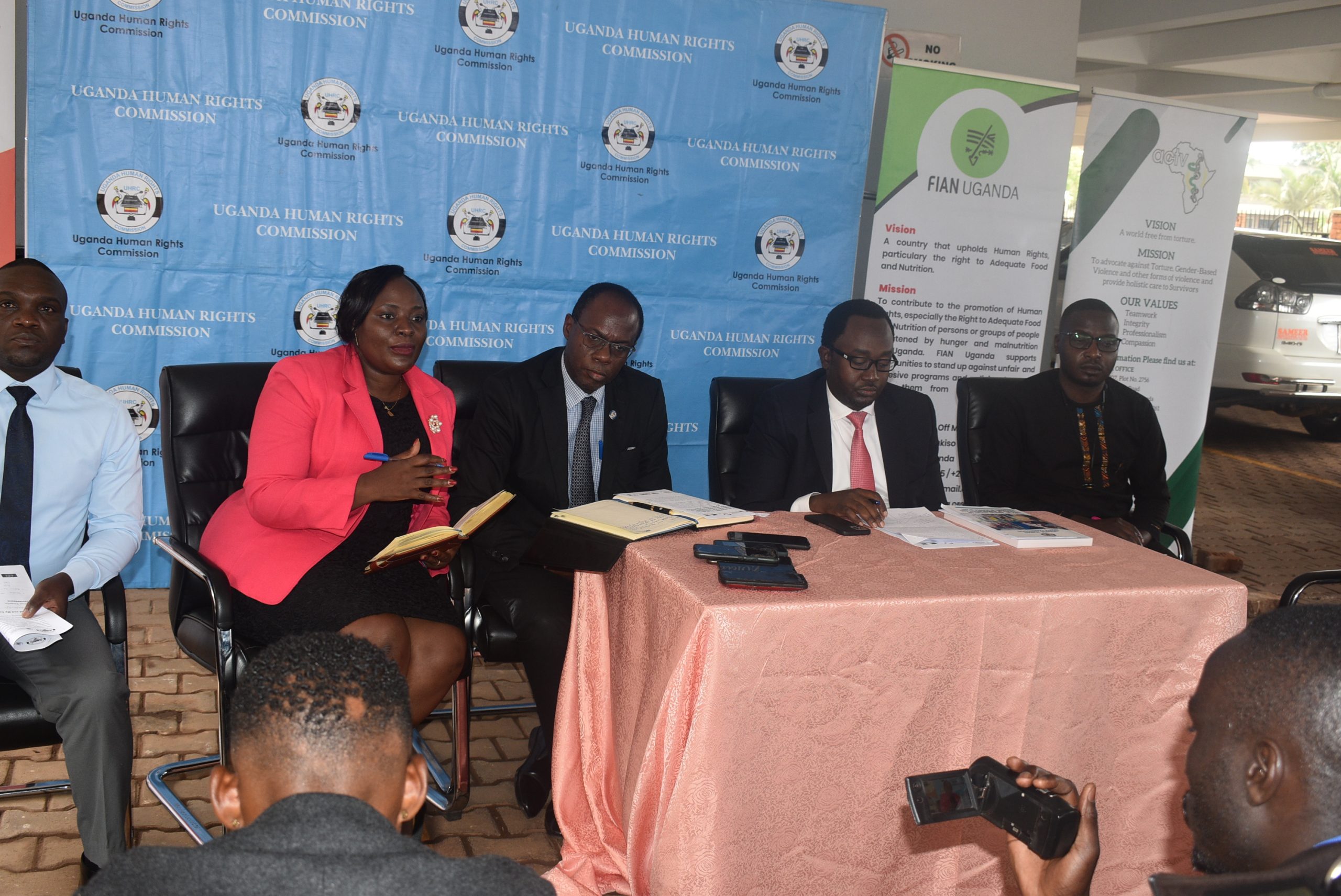 The Uganda Human Rights Commission (UHRC) has today (December 5) flagged off a series of activities to Commemorate this year’s International Human Rights Day (IHRD). The Activities have been launched by Hon. Commissioner Chrispin Kaheru who, in company of several partners, issued a joint Press Statement on behalf of the Chairperson Mariam Wangadya, giving highlights of the Human Rights Situation in the country this year and a lined up of commemoration activities.

“The Commission notes that despite the challenges, there are strides that have been made towards the progressive realization of human rights; [Like] The government of Uganda fulfilled its international Treaty Reporting obligations in respect to the International Convention Against Torture (CAT) and the Universal Periodic Review (UPR),” Reads in part the statement issued to members of the media.

This was issued in the presence of Partners like UN Office of the High Commissioner for Human Rights (OHCHR), Wakiso District Human Rights Committee, the Uganda Law Society (ULS), African Center for Treatment and Rehabilitation of Torture Victims (ACTV), National Alliance of Agricultural Co-operatives in Uganda (NAAC), Uganda Police, Uganda Prisons and the Human Rights Center among others.

While supplementing the Statement, the CEO ACTV Mr. Samuel Herbert Samuel Nsubuga encouraged the media and the general public to refer victims of Human Rights violation to UHRC and to them who specifically handle torture cases. On his part, Mr. Elly Kasirye, the Chairperson Wakiso District Human Rights Committee explained why wakiso District was chosen to host this year’s commemoration and why Nakawuka Playground in particular.

“Wakiso district is the center of human rights violations given its proximity to the capital Kampala and its high population,” he said. On his part the Communication officer for NAAC Ambrose Asingizibwe said land is a critical resource for farmers yet there are many issues of land grabbing and evictions which deprive farmers of their source of livelihood. He said women face a lot of injustices when it comes to land yey they are the biggest cultivators of land. Most of them do not own land or the little they won is often grabbed by men so there is need to address agricultural injustices.

The Journalists wanted to know the number of complaints the Commission has so far received from Mubende and Kassanda since the lock down began and what the Commission has done in respect of alleged abduction of supporters of the National Unity Platform (NUP).

“As per now, the commission hasn’t received any plaint in regard to the lock down which is in total contrast with the numbers received during the first lockdown in respect of Covid-19. As per the alleged abductions, the Chairperson wrote to the Secretary General of NUP Mr. Louis Lubongoya to furnish us with names of their alleged supporters allegedly abducted. The SG wrote back giving us a list of 25 people, some of whom we had already profiled in our 24th Annual Report,” UHRC Director Monitoring and Inspection Ms. Ruth Ssekindi responded. She said some people mistake lawful arrest with abductions and explained the difference between the two words. She said if someone is arrested by another who is not authorized to and he/she is kept in an ungazetted place without the knowledge of his/her next of keen, then that amounts to enforced disappearance in law which some people categorize as abduction. But the police has a right to arrest any person suspected to have committed an offense and take that person into custody. Commissioner Kaheru said issues of torture and abuse of human rights will soon end because the Commission is going to put in use the Human Rights Enforcement Act and the Prevention and Prohibition of Torture Act which place the responsibility of the violation on an individual as opposed to collective responsibility.  The main commemoration will be held at Nakawuka Playground in Wakiso district on December 10, 2022.